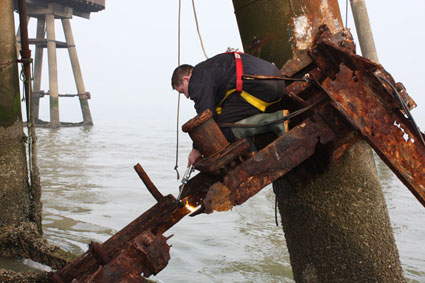 The 66 year old docking stage at the Southern Gun Tower has finally given up resisting the harsh winter storms.  Maintenance crews removed several tons of debris surrounding the tower legs in February to prevent any structural damage to the fort. Now bereft of its fendering, access to Redsands has been suspended until a new system can be installed.

The two new cable bridges scheduled for installation by The Royal Engineers in late spring 2009 is now on hold. Meanwhile, engineers Tony Pine and Justin Yardley have prepared plans for the new fendering and materials are being sourced.

Two Rock Bands have offered to do fund raising performances to help with financing this costly work. More news on these events will be found on this website during April.