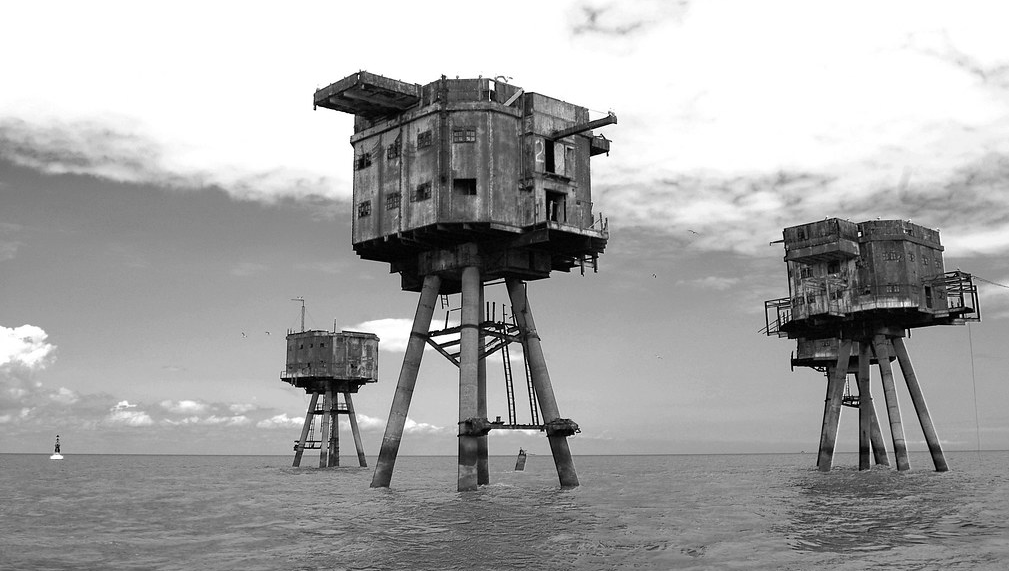 The Sea Forts, By Tim Mitchard.

This month sees the launch of a book that has taken me 20 years to complete. The book, the Sea Forts feature’s many of the pictures I took of Red and Shivering Sands. The pictures have been taken from the air and sea, plus a number from inside one of the towers.

I first became aware of Red Sands during the 1970’s while off sick from school. That afternoon ITV re-ran the Danger Man episode “Not So Jolly Roger”. This had been filmed partly on Red Sands during the pirate radio days 1960’s. In those days I lived in London, but a few years later the family moved to the north Kent Coast and while standing on Herne Bay beach I saw Red and Shivering Sands for the first time.

During those days there wasn’t as much information about the forts as there is today. However I did manage to trace the forts history. But I wanted to get out there and see for myself.  I also had a growing interest in photography and wanted to photograph the towers.

Over the years since my first trip to the forts I’ve taken many pictures and have seen the towers gradually change with time. But it wasn’t until the summer of 2007 that I finally boarded Red Sands. The thing that I noticed most from my 4 trips last summer was how much the towers have changed colour. Red Sands these days is red. Few of the windows remain intact and any sign of Red Sands cat walks have long gone. However you can still see the Radio City frequency painted on Shivering Sands and 390 writing on Red Sands.

The boarding of Red Sands is very easy since the platform and ladders were installed a couple of summers ago. At the top of the second set of ladders you find yourself on the first floor. There are still signs on the doors from the war and much of the paint is peeling. The wash rooms are still there along with the boiler room. But again the inside walls as you would expect are rusting. It was good to see DJ in a radio studio once again broadcasting from the fort.

During my few hours on the fort I most enjoyed the roof. The view on a summer’s afternoon is fantastic. You can clearly see the other towers, in the distance the new wind farm and Shivering Sands, plus Sheppey and the north Kent Coast.

The reason for my book has been the amount of interest in my pictures and requests for copies. All of my pictures are posted on line here, and copies of the book can be found here. Over the last year I’ve also found growing interest from people who didn’t know the forts were there. During last summer Sea Forts 23 became the most popular picture on the BBC web site: Britain’s Best Buildings. And was chosen from over 26000 entries to be displayed at Bradford’s National Media Museum.