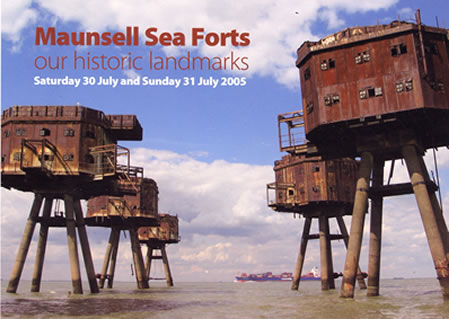 Talks, Trips and Exhibitions on the 30th and 31st July 2005 A Report by Linda Mason, Area Event Organiser for Kent County Council

The event was a success with many of the talks full with visitors crowding the walls to hear the speakers despite the wet weather. The Tea Gardens sold teas and cake to keep spirits high as the rain fell.

The event was kindly opened by the Sheriff Cllr Lewis Norris. The Sheriff and his wife Anne extended their visit to take in a talk by Bob Le-Roi, A local Radio City DJ.

Bob Le-Roi started the event with a signing for his new book called “Making Waves”. Bob told of his life on the forts during his career and got many visitors reminiscing the history of radio and the jingles were very popular. Bob attracted many djs and inspired some lively discussions.

BBC Breakfast TV interviewed Military Historian Mr Frank R Turner shortly before his talk so was able to get some additional publicity for the forts. Franks talks were widely attended, some from WWII, some locals and some from the construction side, attracting some thorough questioning at the end.

Project Redsand are a trust, set up as a charity to retain and restore the Red Sands forts. They were very pleased with the publicity and many locals and visitors took time to study the exhibition, use the interactive computer show. Many learnt much more about the forts and completed the “support” questionnaire. They aim to arrange for funding from a variety of sources to fund restoration of the towers.

People came from great distances, well outside the county to attend and buy the merchandise. Some items were sold out, so the event is definitely worth repeating.

The WWII vehicles were popular and inspired a number of questions, especially the jeep – originally built to last 90 days, still working today and road legal. The Dandy C (WWII Whitstable Search and Rescue boat) hopes to attend a future event.

Weather conditions reported on the day meant the Bayblast trips were unable to fulfil their ambitions for the weekend so they were cancelled late Saturday morning. This is only the second time Bayblast have needed to cancel an event and they worked hard to offer other dates by Sunday morning. Those who saw the forts were fascinated by their imposing size and varied history.

The WWII menu on the Sunday at St Mary’s was another success, treats such as boiled beef and carrots and Corned beef hash proving tasty and popular.